A young man finds inspiration from mentors who changed his life trajectory.

After a family tragedy forced him to live with his Grandmother, Harrison Peters struggled to find his place in the world. Labeled a lost cause, one teacher saw the potential in him, and inspired Harrison to enroll at the University of West Florida. Now, he serves as Chief of Schools for Hillsborough County and works to impact kids the same way his teacher impacted him many years ago.
Discover More
Watch Video
Listen Here 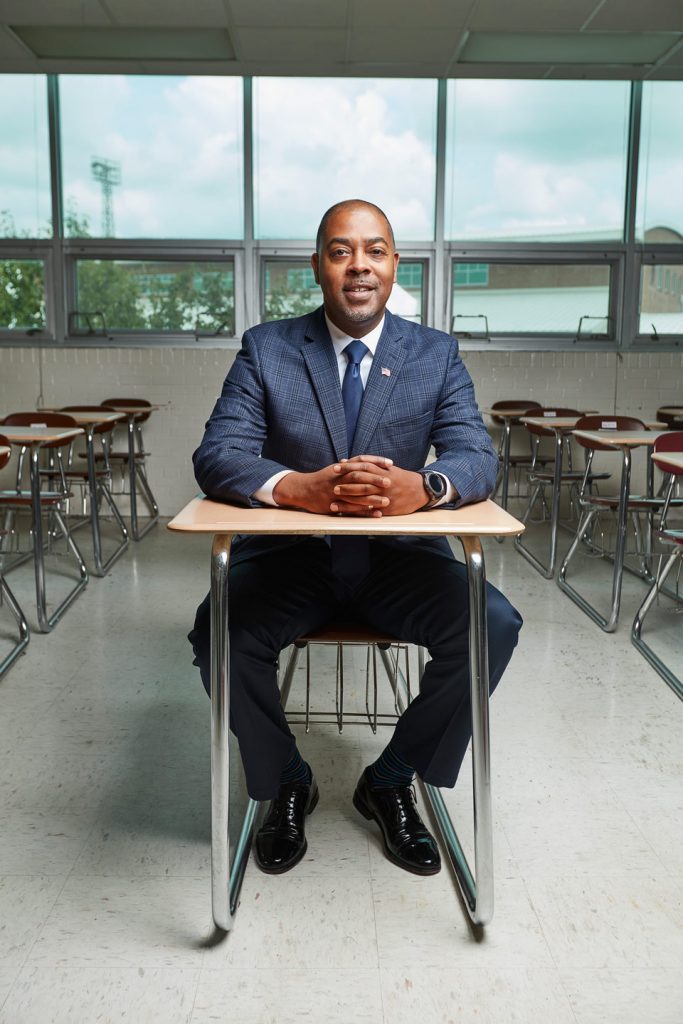 Harrison didn’t grow up in the typical home. He never knew his real father. His mother, addicted to drugs, raised Harrison and his brother the best way she could. She fell in love with a man, someone Harrison could look up to, until one tragic night, he shot himself in front of Harrison and his younger brother while his mother was away.

Harrison was ten. And the events of that evening changed Harrison’s life forever. Not long after, Harrison moved to live with his grandmother in Pensacola, Florida just a few blocks away from Pensacola High School. His grandmother, having grown up in a very different period and a very different time, had herself limited access to education and resources. Harrison was stuck, without a clear path or direction to guide him.

By the time he reached high school, Harrison had made a name for himself as the class clown who was more interested in goofing off with friends than studying. He played in the school’s basketball team under the leadership of Coach David Williams, now the current Principal. And while his coach would tell you that Harrison was not the best player, Harrison himself believed his only chance of getting into college was through the basketball court. Chances were slim for Harrison, and his future hung in the balance.

...delivering the tough love and support that would inspire in him a desire to achieve more than he thought possible.

+ Coach Williams and Harrison Peters are champions for kids.

One day in class, after goofing off, a teacher pulled Harrison aside and told him he was not college material. The words sunk in for Harrison. But another teacher, who saw the potential in him, prescribed a dose of tough love in order to get Harrison to shape up and be prepared for a harsh world awaiting him. That teacher ended up being the first African-American teacher to teach in Escambia County. She knew the challenges that faced him as a young, black man. And she knew where his life was headed if he didn’t get in line. Over the many months remaining in Harrison’s high school years, that teacher pushed Harrison, delivering the tough love and support that would inspire in him a desire to achieve more than he thought possible.

After serving in the military, Harrison came back home to Pensacola and enrolled at UWF. Through the mentorship of a friend and advisor at the university, Dezzie Peters, Harrison found a passion for childhood development and education and graduated with his Bachelor’s degree in Elementary Education in 1999. Fast forward two decades later, and a successful career working in challenging public school systems in Orlando, Charlotte, Chicago and Houston, Harrison now leads Tampa’s public school system as the Chief of Schools for HIllsborough County.

A man driven by results, in four short years, Harrison has increased the graduation rate by 14 points and got a 1.3 million tax referendum passed for school funding — a massive milestone since Hillsborough County had never passed a tax increase for school funding before. In the same timeframe, he also increased the overall graduation rate in Chicago and raised the average ACT from 14.9 to 18.5 percent.

If you ask Harrison what influenced his decision to pursue education as a career, there’s no doubt that he’ll tell you it was all because of one woman who never gave up on him. Today, he serves as a champion for kids—helping them to achieve their full potential—just as that teacher (and mentors like her) did for him so many years ago.