The largest ocean in the world cannot extinguish the American Dream.

In the face of unimaginable adversity, one family’s focus to escape war and embrace uncertainty is all that stands in the way of creating a better life half a world away. Inspired by her parents’ determination, grit and sacrifice, Hong navigates her own journey—as a first generation college graduate—armed and ready to take on some of the biggest challenges facing healthcare—and her community.
Discover More
Watch Video
Listen Here 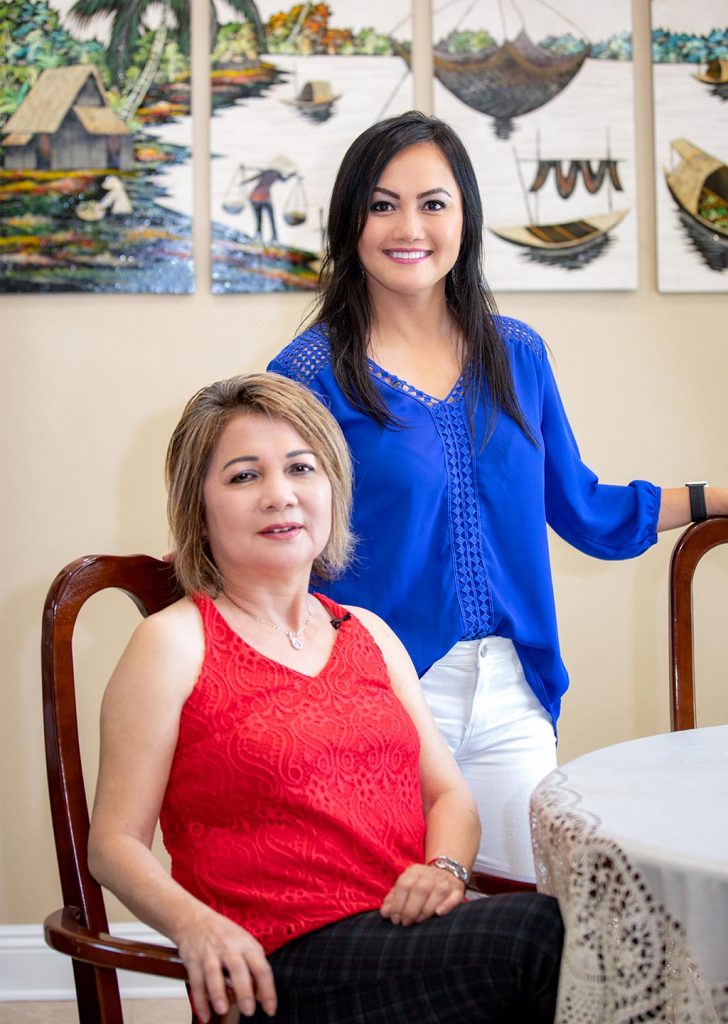 What dreams are made of.

The first time I met Hong was at her parent’s house. I drove into a quaint little neighborhood—the kind with a nice brick landmark sign and only one entrance and exit—slowly meandering through newly constructed McMansions with beautifully manicured lawns, decorated entryways, and neighbors who wave as you pass by.

I reach my destination: a beautifully-built 3,700 square foot middle-class home, a humongous mansion compared to my own 900 square foot cottage. It’s newly constructed, less than ten years old. I pull up into the driveway, behind a brand new BMW SUV and immediately think to myself, “I have the wrong address.”

This house is a little different than the others on the block. It’s bigger, more elaborate in design, and features a horseshoe driveway. The landscaping is simple, yet still elegant. I walk up toward the double-door entryway, where a young, petite woman, barely the age of 40, answers with a big smile and a handshake.

A home filled with stories, food and family is a small reminder of the journey, and an inspiring symbol for what can be achieved.

Hong and her mother being gracious hosts.

Hong Potomski may appear to be unassuming… she’s slender and barely an inch over five feet without heels. But underneath that petite frame hides a quiet confidence and an insatiable determination to succeed. Hong’s mother joins us, smiling and nodding her head.

I walk into a massive foyer, a string of shoes neatly lined up on one side. The house is clean and peppered with silk flowers, family portraits and asian-inspired decor. I take my shoes off —this is an Asian home afterall—and walk through to the kitchen, with bay windows that overlook a shaded and enclosed pool. I suddenly feel small standing next to this family inside their castle fortress, and quietly wonder to myself what kind of sacrifice and hard work it must have taken to go from nothing, to something more than “something.”

In some ways, Hong’s story was also my story: A first-generation American child of immigrant parents who moved here with nothing but a dream. And much like myself, Hong feels indebted to her parents for giving her a life that could have been very different otherwise. It can sometimes feel like a weight—to make sure you don’t let them down, a feeling that you can’t let their journey be all in vain.

Like all immigrant stories, Hong’s story begins with her parents, both escapees from war-torn Vietnam. Her father and mother fled their hometowns to stay one step ahead of the oncoming communist regime. Her father journeyed first toward Hong Kong, her mother following shortly after. Her journey was not without its own challenges—at one point on a tiny boat floating down the river, she and her boatmates had to remove their clothing to plug a hole—doing anything to keep from sinking. Anything to keep surviving. They lived in refugee camps for a short time, uncertain of where to go other than “out.” Eventually, they made it to their destination where they gave birth to their daughter, Hong, named after the city in which they escaped to.

Things moved quickly soon after. What started as an escape toward Hong Kong, evolved into a journey spanning an entire globe. Hong’s family made their way to the States via Chicago. But Chicago winters were no place for tropical people, and before long, Hong’s family found themselves moving once more, this time to the quaint Gulf-side city of Pensacola, Florida.

Hong and her mother are gracious hosts. I walk through the foyer overlooking the pool and make my way toward a large, open-concept kitchen and family den. Photos of Hong’s family hang on the walls: Hong and her brother as children, a few more recent photos, and images of Hong’s parents at around the same age as Hong is now. The kitchen is clean and tidy, a large family-sized rice cooker conspicuously placed in the center island. As I look around, a sense of warmth falls over me. The kitchen is where families gather. And the food is what keeps families together. On one wall opposite the kitchen is a photo of a large, 60 foot wooden boat. With only us inside, the house feels empty, yet brimming full of stories.

Hong’s father isn’t with us because he’s out in the Gulf of Mexico on a boat similar to the one in the photo. He spent his formative years as a fisherman in Vietnam, and has since made a successful career as a shrimp boat captain, often leaving for weeks at a time during the season and making infrequent stops to Bayou La Batre, Alabama to unload his haul, before heading back out into the waters again. It was the same for Hong growing up. Her father was absent for much of her childhood—not because of neglect, but because of a family duty to provide for his family. How Hong describes her story to me implies that despite these challenges, Hong’s parents made time as a family during his short stints on land.

It’s these values of hard work, determination, family values—combined with a weighty sense of duty to achieve more in honor of her family’s sacrifice—that fed Hong’s soul growing up. Hong pursued her undergraduate degree at The University of Central Florida, but came back home to Pensacola, where she enrolled at the University of West Florida and received her MBA and MA in Healthcare Leadership.

What she learned at UWF prepared Hong for her role at Baptist Healthcare’s Heart & Vascular Institute as Operations Director. In that role, Hong led a multidisciplinary team to implement a new program service called Extracorporeal Membrane Oxygenation (ECMO). The new breakthrough medical treatment received wide acclaim after it saved a young boy on vacation from North Carolina from pulmonary failure. 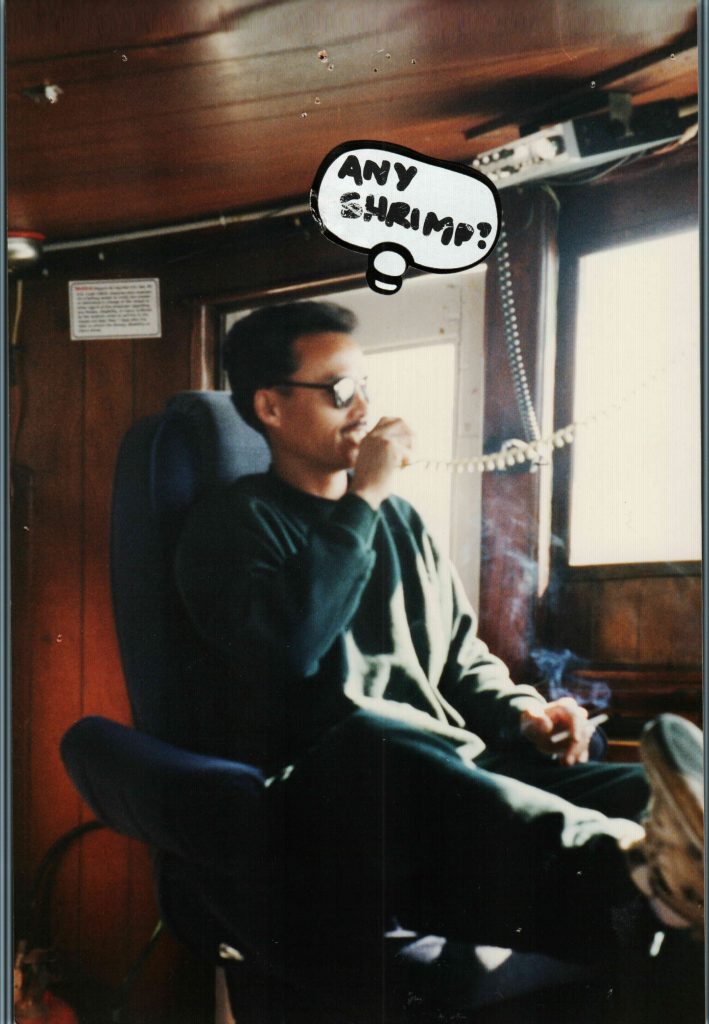 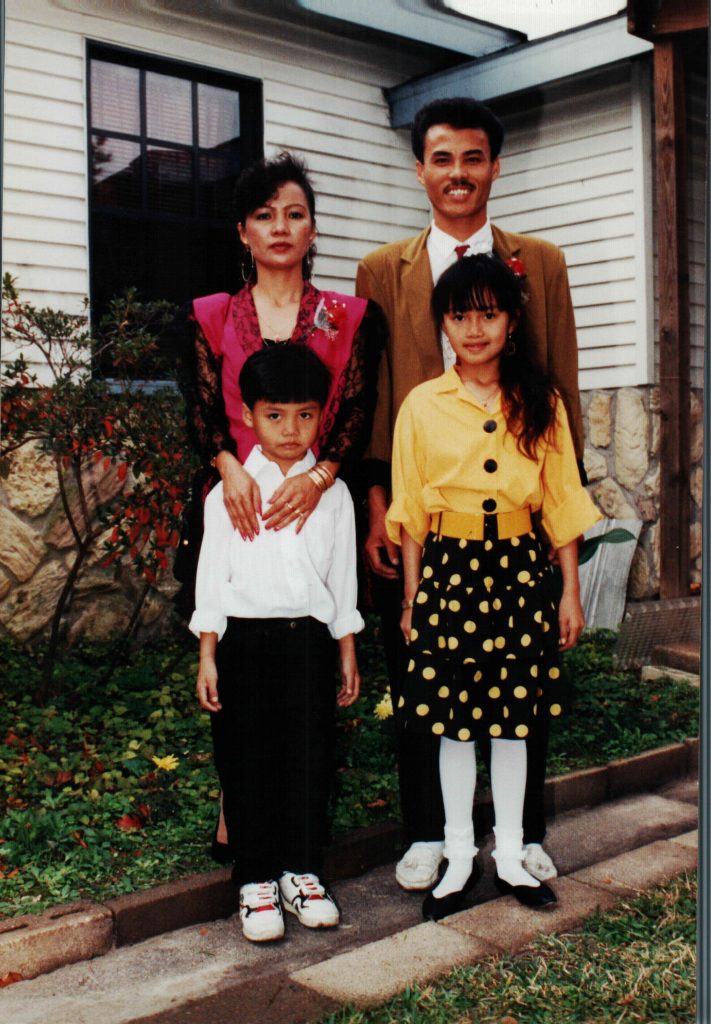 Hong’s own experience with her family growing up, along with the personal and professional relationships she’s built over the years, instilled in her the importance of mentorship and an awakening to make an impact in other people’s lives. As a result, Hong has become a champion for her community, becoming a Big Sister with Big Brothers Big Sisters, and also serving on the board of directors. She just recently joined the UWF Alumni Association Board of Directors, and participates in active community leadership and committee meetings.

Today, Hong now serves her medical community as Executive Director of the Andrews Institute Research & Education Foundation in Gulf Breeze, Florida. The story of this one woman’s success is directly attributed to her parents’ self-sacrifice, hard work and determination to overcome the odds, embrace uncertainty and achieve the American Dream. A home filled with stories, food and family is a small reminder of the journey, and an inspiring symbol for what can be achieved.

Hong and I talk through the details of our video shoot, and uncover greater depth and detail to her motivations. We determine angles, roleplay actions for the camera, and plan our video production shoot, with her mom happily cooking in the background. After awhile, I leave this small mansion inspired by Hong’s story and her parents journey. Their story hits close to home. I’m humbled by their legacy to provide their daughter the opportunity to create a dream for herself: a first generation American, a first generation college graduate making a mark in a foreign country, a foreign community, but a home nonetheless.