The Man Who Knows No Limits.

The path to earning a college degree and choosing a career isn’t always a straight line. For Steven Thornton, this is especially true.
Discover More
Watch Video
Listen Here

The Man Who Knows No Limits.

The path to earning a college degree and choosing a career isn’t always a straight line. For Steven Thornton, this is especially true.

Born into an Air Force family in El Paso, Texas, Steven’s family landed in Navarre, Florida when he was in high school. In a strange new place he now had to call home, he struggled. “I was always a bit of a troublemaker,” Steven reflects. “I didn’t like authority or being told what to do. I wasn’t the kid with the perfect grades.”

Steven graduated high school and did what a lot of high school graduates do: start college. But five weeks into his first semester at UWF, Steven didn’t feel engaged with his classes. Failing to keep up, he dropped out.

Deeming himself “not college material,” Steven put school in the rearview mirror and began what would become a winding road of short-term jobs and unappealing career prospects. “I bounced around a lot and made some not-so-great choices,” Steven said. “I worked in restaurants, lawn care, construction and even considered the military and working on oil rigs.”

But he wasn’t sure where he was going. Repeated rejection from entry-level jobs left him feeling defeated. Unsure of what to do next, he took a pause.

Luckily, inspiration struck from an unlikely source. “One day, I was watching the movie The Martian, a sci-fi drama about an astronaut stranded on Mars and the valiant efforts to rescue him, and it made me wonder, ‘what does it take to work for NASA?’” One quick Google search later and Steven learned that a degree in mechanical engineering was one way to get in the door.

With a love for mechanics instilled by his grandfather, Steven Thornton built on his natural abilities to become a valued member of the robotics lab team at IHMC.

Steven always knew he had a natural inclination for math and science but wasn’t sure how it would apply to his career path. He also liked working with his hands. As a kid, his grandfather taught him how to work on old cars, which led to an interest in mechanics. “My grandfather loved working on cars—he would get the cheapest, junkiest cars and bring them back to life,” Steven remembers. “When I was 14 or 15, I helped him replace the brakes on the family cars. I would do the physical stuff while he directed me. It gave me the confidence to know I could work on things.” Those early lessons stuck with Steven throughout his youth. His friends would tease him about his unconventional, pieced-together creations—but they worked.

Was it possible to go from a troubled teen to a potential NASA engineer? Steven knew it was a long shot, but he was never one to shy away from a challenge.

After five years away from the classroom, Steven made the decision to enroll at Pensacola State College in the pre-engineering program. Starting out with general studies and basic math classes, his initial excitement quickly evaporated. His ultimate goal of becoming a mechanical engineer felt light years away—almost unattainable. Even his well-intending, supportive father reminded him of what he was facing. “When I first got back into school at Pensacola State, my dad said, ‘If you go to school now, it’s going to take you four or five years to finish.’ He didn’t mean it in a negative way—he just wanted me to understand the commitment.”

In engineering and in life, Steven understands the whole is the sum of its parts.

But something had clicked for Steven. He had always been into physical fitness—a hobby and outlet that taught him that dedication, consistency and small, compounding gains were the keys to reaching his goals. Steven applied that same mentality to his education journey. “I didn’t necessarily believe it would happen, but I kept going.”

For all the one-foot-in-front-of-the-other work, there were moments of motivation along the way. Steven’s sister, five years younger, graduated with her engineering degree as Steven continued to study. “It was a boost to see her outperforming me.” Inspired and fueled by the competition, Steven worked harder than ever.

Steven went on to complete his associate degree and enroll again at UWF—this time, a very different person than the uncertain high school graduate he once was.

At IHMC, Steven bridges the gap between man and machine. “Ten years ago, legged robots were still in their infancy; now we have robots doing backflips.” 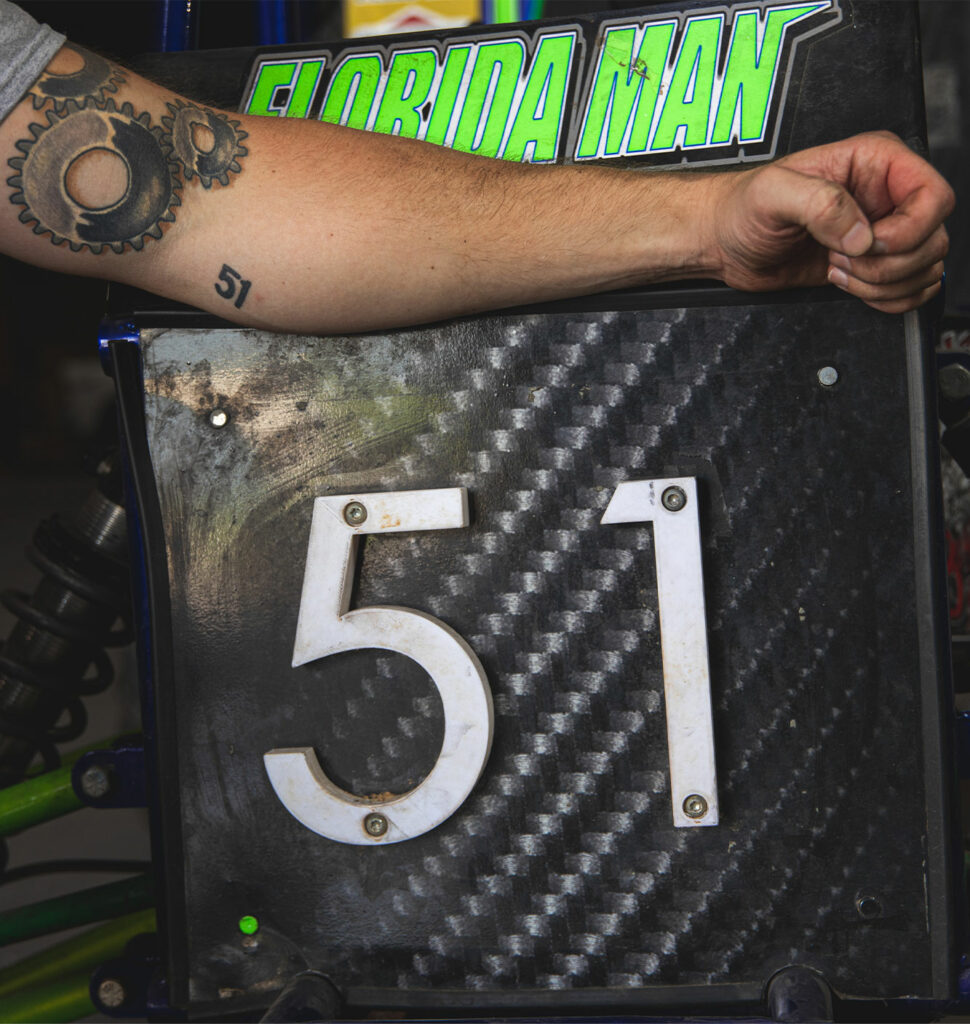 A lasting impression. Steven’s tattoo is a personal reminder that luck is often hard work in disguise.

After what felt like ages, he was finally taking classes in the mechanical engineering program. One of his professors was Dr. Piacenza—a laid back, Volkswagen-van-driving Californian. Dr. Piacenza’s philosophies about school, education and careers changed the way Steven thought about “the right way” to do things. “I started to realize that real-world experiences were crucial, and that grades, although important, weren’t the ultimate measure of my abilities.”

Dr. Piacenza encouraged Steven to apply to be a part of the UWF Society of Automotive Engineers Baja team, an extracurricular intercollegiate competition for designing and fabricating off-road vehicles. “It’s like the football team of engineering: a pretty big deal,” Steven said. With a 30 to 40 hour-per-week time dedication in addition to his full-time studies and weekend job, he knew it would be a huge commitment. He decided to take a gamble on it working out. It did.

Steven capitalized on his newfound confidence and mechanical skills from his days with his grandfather, ultimately becoming the captain of the SAE Baja team for two years. “I put a lot of time and effort in, and though I didn’t get the best grades, it helped me stand out with hands-on design and fabrication experience.”

As Steven was nearing graduation, a guest speaker from the Institute of Human and Machine Cognition  visited his class. The speaker showed the class a video of what was possible at the not-for-profit IHMC—a near fantasyland of technology and research aimed at leveraging and extending human capabilities. The man’s presentation on artificial intelligence and humanoid robots was especially gripping. Partners for the Institute included Microsoft, several branches of the U.S. military, Boeing…and NASA. Enthralled, Steven followed him out of class and asked if he would pass along his resume to someone at the organization.

The stars aligned, and a few weeks before graduation, Steven was offered a position at the prestigious institute. Bewildered at his good fortune, Steven graduated from UWF and started at IHMC a mere three weeks later.

Excited as he was, the transition wasn’t easy. Thrust into a foreign environment with MIT-educated scientists and some of the top engineers in the field, he felt extremely overwhelmed. “I felt like I was the lowest on the totem pole. I was working in the robotics lab and knew nothing about robotics.”

However, he used that to his advantage, soaking up knowledge from his peers and contributing in his own right. And now, as part of a small team, Steven is able to perform many different roles. His ongoing project is working with his team on Nadia, a high speed and high range of motion humanoid robot.

The man, the myth, the legend. Steven and his mentor, Dr. Joseph Piacenza with the off-road vehicle they built together with the UWF SAE Baja team. 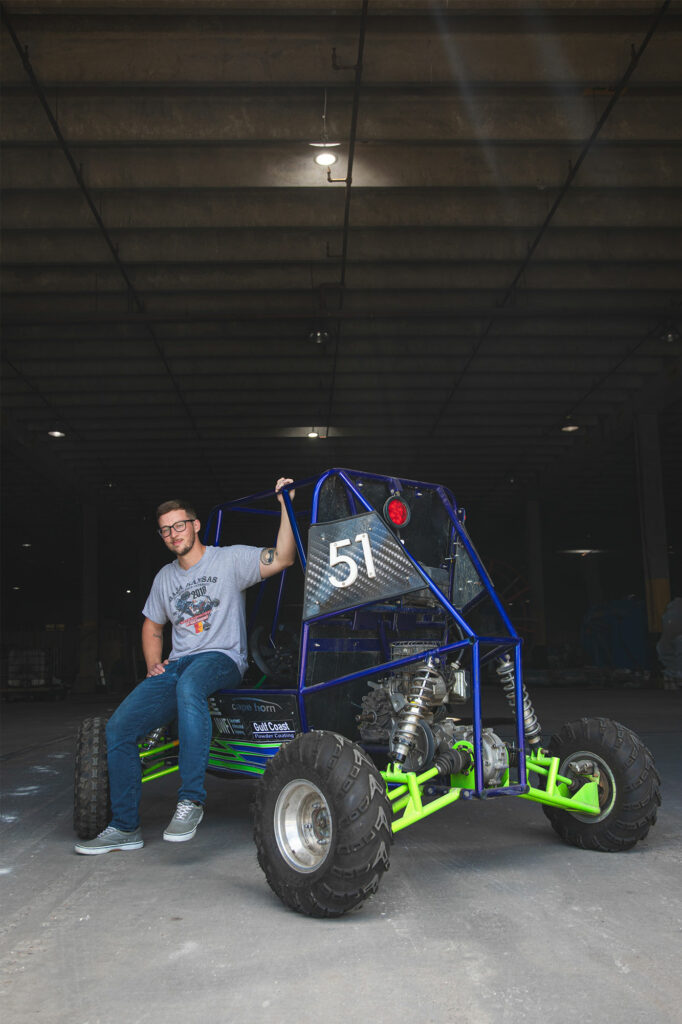 Steven with the off-road vehicle he fabricated when he was team captain of the UWF SAE Baja team.

After IHMC spent years prototyping and 3D-printing parts for Nadia, Steven was able to step in to assemble and troubleshoot the robot. Watching it “come to life” has amazed him. “It’s awesome to work on things that haven’t been done, or haven’t been done a lot,” he says. “Ten years ago, legged robots were still in their infancy; now we have robots doing backflips.” Sometimes, even Steven himself can’t believe he got here.

“It’s a once in a lifetime thing. I don’t know what will happen next, but I’m so glad I have this opportunity. I never thought I’d be building a robot for the government.”

For now, Steven is still working hard at IHMC and enjoying his ongoing journey, which includes embarking on the next adventure—entering the mechanical engineering master’s program at UWF.

He credits the adversity he faced in his teens as a key part of his personal growth. “When I was younger and getting in trouble, I would have told you I was unlucky. But now I believe that things will work out if you believe they will. Now I know that my luck was really a reflection of the work, energy and time I put in.”

And that far-out notion of working at NASA? Steven hasn’t forgotten about what that spark of an idea did for him.

“It has been a great ride and I’m proud of where I am, but I think there’s still much more I want to accomplish. Now I know that even if it takes a lot longer than you would expect or want it to, if you show up every day and work on your goal, it will eventually happen.”

Steven never considered himself an impactful person, in fact, feeling at times less than ordinary. But his story is an example of the true meaning of success—a cosmic culmination of the risk to begin, refusal to give up and a deep belief that the future holds far greater things than the past could ever limit.

“It’s a once in a lifetime thing. I don’t know what will happen next, but I’m so glad I have this opportunity.”